One of our customers sent us this photo of a green roof they made. And just 2 days ago I mentioned we like getting these photos, in a post featuring another customer’s photo! 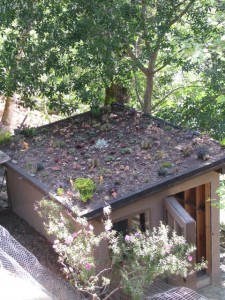 Goat house with plants from Cactus Jungle. It has been a year. Sorry I meant to send sooner. I lost the name of the gal that works there that helped me. She wanted to see it complete. This photo does not do it justice. I love it!
Thank you for your help with this,
Susan Nightingale

And it’s a goat house! I love goats!

National Geographic wants to know, or wants you to know. Check out their Greendex. I did. I scored 61, but then it’s self-scoring, so I’m sure I shaded my answers a bit.

The NYAS traveled to the Galapagos Islands to find out why certain cacti species there are starting to disappear.

With tourists swelling in number each year the Galapagos have now been put by UNESCO on the list of endangered World Heritage sites. In March of 2007 a team of four, led by Darwinian expert Frank Sulloway, and sponsored by the Charles Darwin Research Foundation, focused their investigation on the destruction of endemic Opuntia cactus. They used old photographs and a repeat photography technique during a 16-day field trip.

Dr. Julianne Chase will describe some of the policies and quarantine procedures intended to protect the fragile ecosystem and native species

It turns out that you had to have attended a lecture on April 21 in New York to have found out what was going on. For the rest of us, the Mystery Remains…

Unless you attended Dr. Chase’s lecture yourself and want to update us on the results yourself, which would be lovely. I’ll send you a box of cookies…

We don’t use vermiculite in our soil mixes because it is energy-intensive. Turns out there are other problems with it too. The Straight Dope tells all.

The trouble with vermiculite has nothing to do with the substance itself, but rather with a contaminant that’s sometimes found in vermiculite ores: asbestos….

Technically, it’s not just insulation that poses such potential threat, as there are plenty of vermiculite-bearing gardening products around too — it’s added to potting soils to help them hold more water. In 2000 the EPA tested 54 of these: 22 contained asbestos, it turned out, with 8 containing significant amounts and 1 actually releasing asbestos fibers into the air when used. Overall, though, the exposure level for the average gardener was found to be quite low

And I don’t mean eggs…

Anyway, the BBC tells you what’s going on down in Mexico. 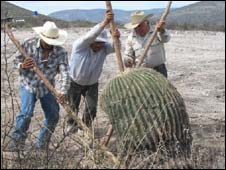 But in Mexico, organised crime has moved into a different market: cactus plants.

It has become a multi-million dollar business, so sought after are some of the species.

I know none of you do this, so I guess I should stop my harangue, as if I had even started one. Maybe someday.

It looks like we’re in for some water rationing in the East Bay. Reservoirs are moderate, but it seems that erratic rainfall has made the water board worried about 2 bad years in a row on water levels. They’re considering restrictions and rationing this summer. From the SF Chronicle.

EBMUD… said that although January and February were wet months, March was the second driest March in the district’s 85-year history and April is the driest to date.

That means the Sierra snowpack, which melts into the Pardee Reservoir where 90 percent of EBMUD water comes from, is yielding half its normal runoff….

More from the Chronicle

“All the research around the impact of climate change in California shows potential prolonged droughts, drier winters, more wild swings between drier years and wet years,” said Tony Winnicker, spokesman for the San Francisco Public Utilities Commission, which provides water to residents of the city as well as communities on the Peninsula. “As water agencies and as consumers, we need to manage our water more wisely. There will never again be a period in California where we don’t have to think about water conservation.”

Winnicker and officials from 10 other regional water agencies met Wednesday to renew a campaign urging consumers to use less water. The meeting came one day after the East Bay Municipal Utility District, which provides water to 1.3 million customers in Alameda and Contra Costa counties, announced that its board is examining mandatory water restrictions, price increases and even water allotments in an effort to stretch its dwindling supply.

This is sounding like serious stuff. We’ve already had customers (yesterday) mention changing over to low-water gardens because of this.

There’s been some big news in the <a href="https://cactusjungle.com/archives/blog/exit.php?url_id=1900&amp;entry_id=1737" title="http://nqr.farmonline.com.au/news/nationalrural/agribusiness-and-general/general/deadly-cactus-alert/57379.aspx" onmouseover="window.status=’http://nqr.farmonline.com.au/news/nationalrural/agribusiness-and-general/general/deadly-cactus-alert/57379.aspx’;return true;" onmouseout="window.status=”;return true;">Australian Weed</a> business. A cactus has escaped and poses dangers to wildlife and cattle too.<br /><br /><div style="margin-left: 40px;"><span style="font-style: italic;">Department of Primary Industries (DPI&amp;F) Biosecurity Queensland land protection officer, Jodie Sippel, said the Hudson pear cactus, a native of Mexico, has been found growing in Mundubbera Shire with a potential second site in the Monto area.<br />
<br />
Hudson pear (Cylindropuntia rosea), is declared a Class 1 weed, which means it must be eradicated, she said.<br />
<br />
It is highly invasive and spreads whenever an animal, vehicle or person brushes against it and dislodges plant segments that take root on contact with the ground.<br />
<br />
The spines from Hudson pear pose a serious threat to people, horses, dogs, cattle, sheep and most wildlife….<br />
<br />
Hudson pear was first detected in Australia, in NSW, in the 1960s.<br />
<br />
According to some reports, its spread was aided by opal miners who deliberately grew them around their diggings to keep prowlers and thieves away. </span><br /></div><br />It has been in all the papers in Australia. This is just one reasonable article describing the mess that can happen when people take a pretty and/or functional ornamental plant into a new territory where it has no natural barriers to growth, and then it takes off causing problems far and wide. Even a cactus. A delicious cactus.<br /><br />

Poaching is a problem throughout the world. Many countries may have tough laws against poaching and yet lax enforcement. Many of these countries are far far away. <a href="https://cactusjungle.com/archives/blog/exit.php?url_id=1881&amp;entry_id=1711" title="http://www.chron.com/disp/story.mpl/world/5546791.html" onmouseover="window.status=’http://www.chron.com/disp/story.mpl/world/5546791.html’;return true;" onmouseout="window.status=”;return true;">Others, not so far</a>.<br /><br /><div style="margin-left: 40px;"><span style="font-style: italic;">Cactus poaching is booming in Mexico, helping to make wildlife species trafficking the third-largest smuggling industry in Mexico behind drugs and guns.<br />
<br />
The trade is fueled by private collectors and the burgeoning xeriscape movement in the U.S. South and Southwest.<br />
<br />
Rare cacti species can fetch hundreds of dollars on black markets from the United States to Japan.<br />
<br />
Mexico’s deserts are so ravaged by cactus poachers that researchers no longer publish the location of new species they find, lest eager collectors plunder the newfound cacti….</span><br /></div><br />more after the break…. <br /><br />
<br /><a href="https://cactusjungle.com/archives/blog/archives/1711-guid.html#extended">Continue reading "Threatened Species and Poaching"</a>

A big Bakersfield development threatens an endangered cactus. From the <a href="https://cactusjungle.com/archives/blog/exit.php?url_id=1810&amp;entry_id=1629" title="http://www.bakersfield.com/102/story/343145.html" onmouseover="window.status=’http://www.bakersfield.com/102/story/343145.html’;return true;" onmouseout="window.status=”;return true;">Bakersfield Californian</a>:<br /><br /><div style="margin-left: 40px;"><span style="font-style: italic;">The Canyons, perhaps the single most controversial development in Bakersfield today…. would put about 1,300 homes on 890 acres atop the bluffs overlooking the Kern River in northeast Bakersfield….<br />
<br />
In particular, they’ll look at the effects the development would have on the endangered cactus preserve downhill from the proposed development.<br />
<br />
Right now, the Bakersfield cactus thrives because it gets rainwater from the whole area, but changes to the drainage patterns there could put them in jeopardy, she said.</span><br /></div><br />Court cases are pending as we speak. Any protests?<br /><br />

It turns out that cactus and succulents are the latest &quot;green&quot; plants, what with all the low-water requirements and all. In Austin, they take their &quot;green&quot; gardens seriously. <a href="https://cactusjungle.com/archives/blog/exit.php?url_id=1753&amp;entry_id=1557" title="http://www.statesman.com/life/content/life/stories/gardening/12/29/1229garden.html" onmouseover="window.status=’http://www.statesman.com/life/content/life/stories/gardening/12/29/1229garden.html’;return true;" onmouseout="window.status=”;return true;">At least, for 2008 they will…</a><br /><br /><div style="margin-left: 40px;"><span style="font-style: italic;">In 2008, Bering has an ambitious project at his home  a rock wall that houses cacti and succulents  that sounds like it should be called the Hanging Gardens of Beringdom.<br />
<br />
Conrad also promises to encourage us to plant more tried and true natives in the coming year. </span><br /></div><br />Good for them.<br /><br />

ABC News reports on the <a href="https://cactusjungle.com/archives/blog/exit.php?url_id=1729&amp;entry_id=1532" title="http://abcnews.go.com/Health/wireStory?id=4008913" onmouseover="window.status=’http://abcnews.go.com/Health/wireStory?id=4008913′;return true;" onmouseout="window.status=”;return true;">Bad Times for Peyote Harvesters</a>. The article is the same wire story I’ve already posted about, but they add this bit to the mix:<br /><br /><div style="margin-left: 40px;"><span style="font-style: italic;"><img width="413" hspace="5" height="310" border="2" src="/blog/uploads/misc/ap_peyote_071217_ms.jpg" /><br />This is a commonly found peyote plant, photographed March 20, 2004, it is often confused with the rare star cactus that is an endangered species found only in certain parts of northern Mexico and Starr County, Texas. A first ever study of this star cactus is being done on land purchased by the Nature Conservancy under a species recovery plan directed by the U. S. Fish and Wildlife. It is believed by people conducting the study that there are only 2,000 or so of the starcactus left in the wild. The location is kept secret because of poachers who can get a large sum of money for the cactus. (Joe Hermosa/ AP Photo )</span><br /></div><br />

As if yesterday’s Peyote posting wasn’t enough, in which we passed on everything we know about the cactus, and linked to an article about how tourists in Mexico were decimating the wild population, now here comes a story about the Texas variety of Peyote. <a href="https://cactusjungle.com/archives/blog/exit.php?url_id=1712&amp;entry_id=1516" title="http://uk.reuters.com/article/healthNews/idUKN2861718520071217" onmouseover="window.status=’http://uk.reuters.com/article/healthNews/idUKN2861718520071217′;return true;" onmouseout="window.status=”;return true;">From Reuters</a> we find out that they are having similar problems with dwindling numbers of peyote plants in the wild. In Texas the problem is not wasted hippies, but stems largely from lands being used for hunting preserves for the wealthy. Dick Cheney often shoots captive animals there.<br /><br /><div style="margin-left: 40px;"><span style="font-style: italic;"> The profession seems barely legal in a nation perennially at war with drugs, but in the peyote region there is nothing clandestine about it.<br />
<br />
Morales has a big sign out in front of his modest home that proclaims &quot;Mauro Morales — Peyote Dealer, Buy or Sell Peyote.&quot;<br />
<br />
It includes his phone number should any prospective customers pass by.<br />
<br />
&quot;It’s a business,&quot; he said with a shrug of the shoulders in a recent interview. &quot;It’s the only income I got.&quot;</span><br /></div><br />More after the break…<br /><br />
<br /><a href="https://cactusjungle.com/archives/blog/archives/1516-guid.html#extended">Continue reading "More on Peyote"</a>

Their motto is <a href="https://cactusjungle.com/archives/blog/exit.php?url_id=1694&amp;entry_id=1498" title="http://www.plentymag.com/features/2007/12/bosque.php" onmouseover="window.status=’http://www.plentymag.com/features/2007/12/bosque.php’;return true;" onmouseout="window.status=”;return true;">&quot;It’s Easy Being Green&quot;</a> and here they demonstrate with news of some newly liberated wild lands.<br /><br /><div style="margin-left: 40px;"><span style="font-style: italic;">Nearly two dozen members of a New Mexico non-profit, three geologists, sundry guests, and one reporter bowed their heads to 30-knot winds last Saturday to hike up 6,272-foot Chupadera Peak in central New Mexicos Chihuahuan desert. The motley band was celebrating the unique purchase and donation of this $62,000 rock.<br />
<br />
The cacti and cresote covered mountain rises abruptly on the western side of the Rio Grande floodplain. As part of the Chupadera Mountains, it provides both high elevation habitat for songbirds and serves as a natural wall protecting the wetland stopover home for more than 50,000 wintering birds.<br />
<br />
A birding group called Friends of the Bosque will give this 140-acre chunk of mountain to Bosque Del Apache National Wildlife Refuge, a roughly 57,000-acre area of protected land in New Mexico. The refuge will in turn ask Congress to designate the land as wilderness.</span><br /></div><br />More after the break….<br /><br /><br /><a href="https://cactusjungle.com/archives/blog/archives/1498-guid.html#extended">Continue reading "Plenty Magazine"</a>