Also out in force are the California Native Ceanothus which are also out in full bloom. 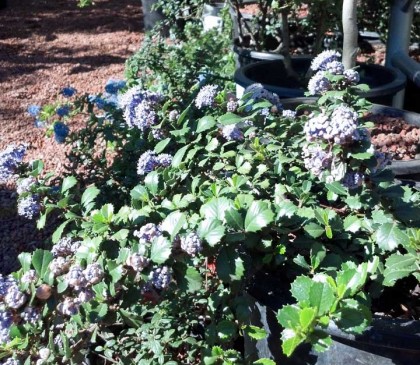 It looks like there’s been a break in the early spring weather as the temps are dipping down below 40F.

Maybe we’ll get some much needed rain too.

In the meantime, we’ve had such nice weather that the nursery is all ready for spring early. More plants are out than you can imagine. Like these California natives. 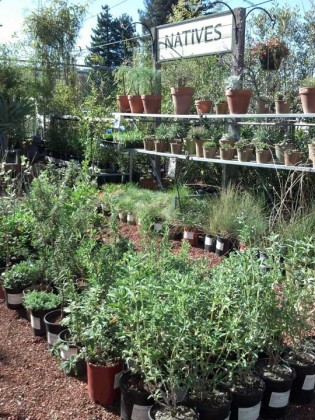 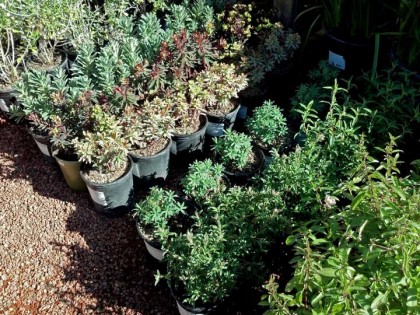 The spurges are looking good for our crazy early spring this year. 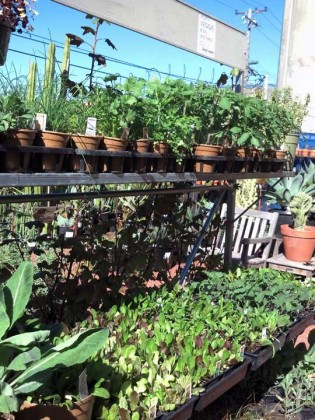 Our first spring organic veggie starts are out at the nursery. That seems crazy. It’s only February! But there you go.

Lots of fresh green tall bamboos at the nursery on such a hot and sunny early spring day. 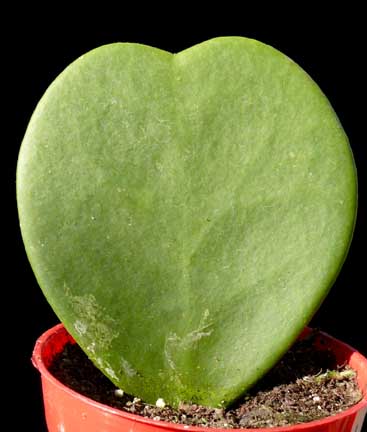 It must be February because we’ve brought out the small, single-leafed Hoya kerrii’s. Normally we only have these in large hanging baskets with giant vines and hearts all over the place. But this year we brought in a supply of smaller plants. Really just the hearts. Right in time for some mid-February impulse purchases. They are pretty. And if they don’t sell we’ll grow out the vines, OK? 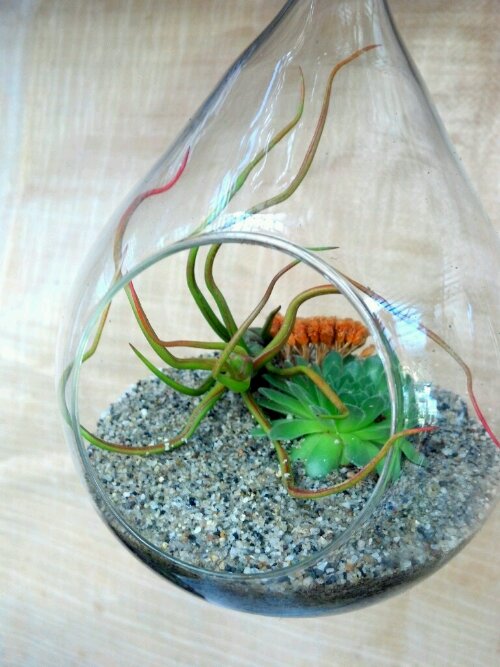 Keith’s latest creation for a customer, to be delivered sometime. I wonder when? 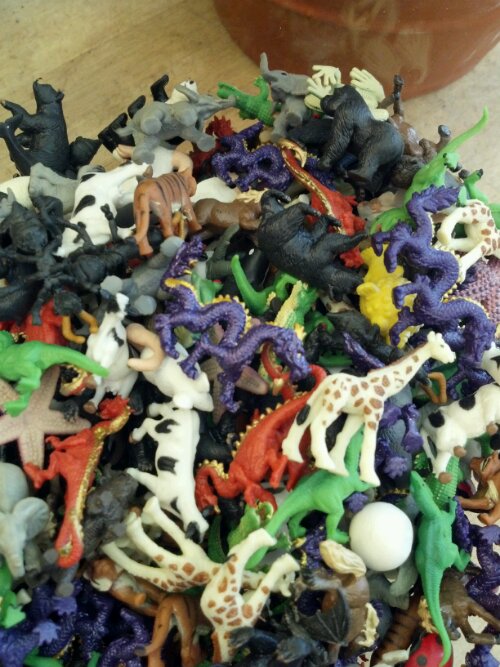 I see the new mini’s are in and we now apparently carry purple dragons. Good to know. 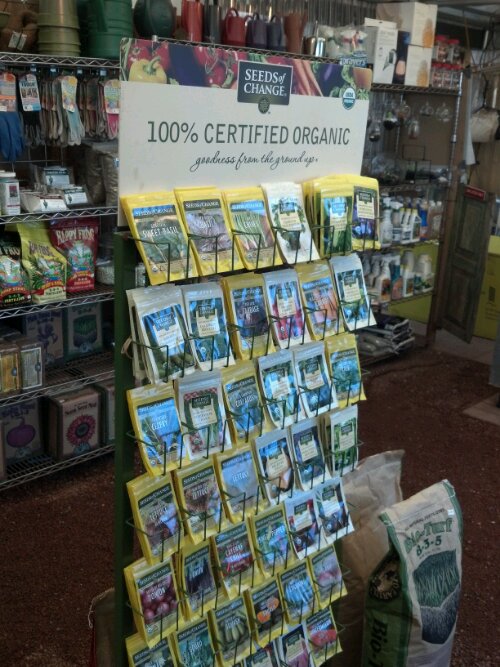 We now have our 2nd organic seed vendor. Seeds of Change have a good program going and nice heirloom varieties too, so it’s a nice complement to all the organic varieties we get from Botanical Interests.

We’ve had Godzilla out for a few months now, and thru the holidays, but no sale. Maybe I should take him home. 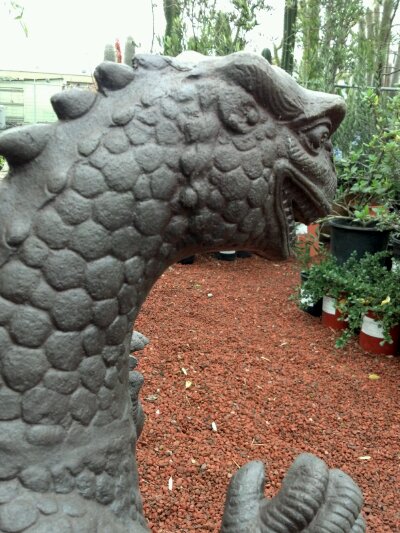 My garden may be too small. Maybe in the turtle pond? Would he scare the turtles?

Pulled! Off the floor. They are causing a really bad allergy attack for me all of a sudden, so no more. Off!

A customer pointed out that one if our succulent wreaths is coming into bloom. 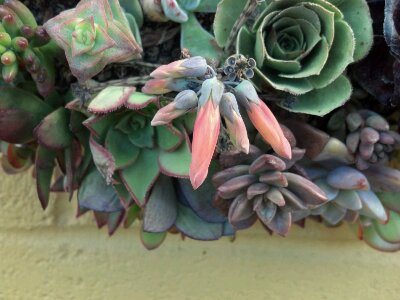 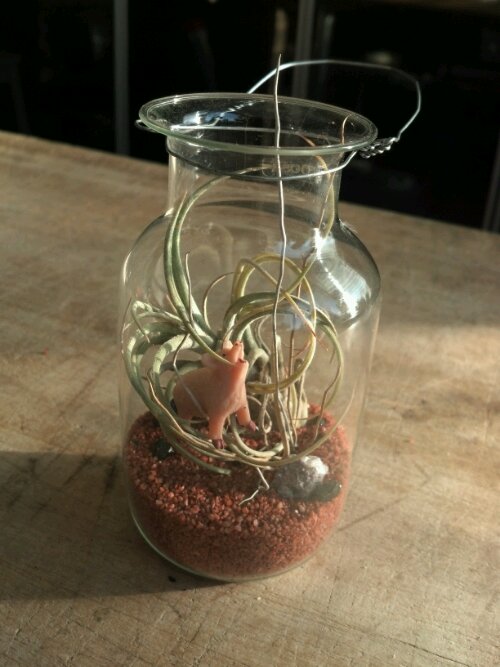 I’m making up a bunch of last minute terrariums, some with air plants, some with succulents. All have a little mini animal in them. 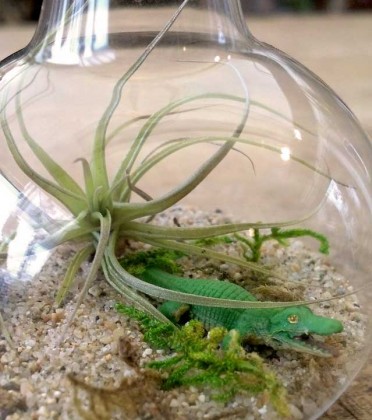 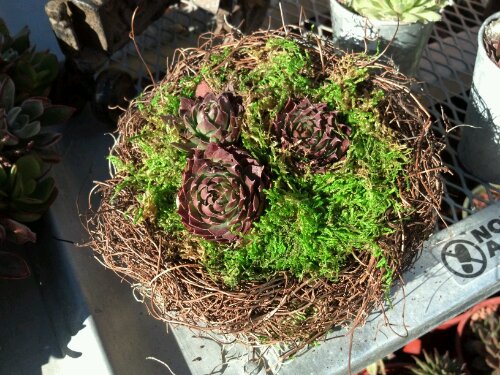 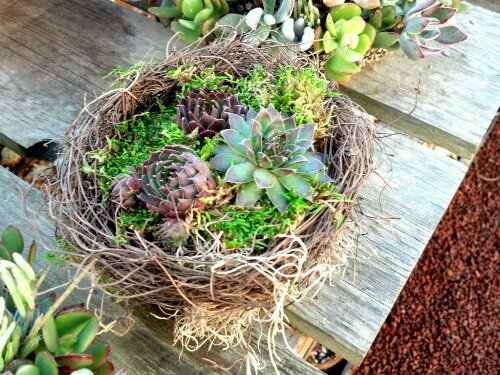 Hens and Chicks (Sempervivums) in a Nest!

You know it’s too cute for words. Get it? Hens and chicks… nest…. awwww, adorable.

I know what I’m getting for all my nephews and nieces. Now you know what to get for your younger brother too.

And now for the pièce de résistance, the culmination of all our hard work for Cast Iron Day. 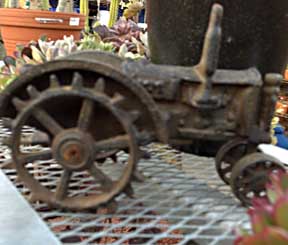 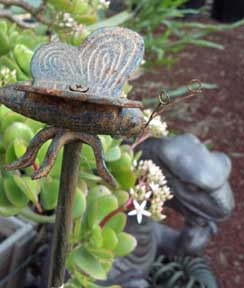 It’s Cast Iron Day at the nursery. Now don’t get the wrong idea here – this is not a promotion at the nursery or anything, but rather a simple blog gambit to get your attention. 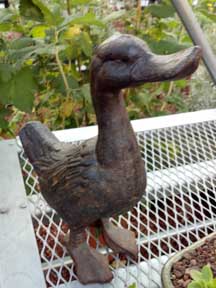 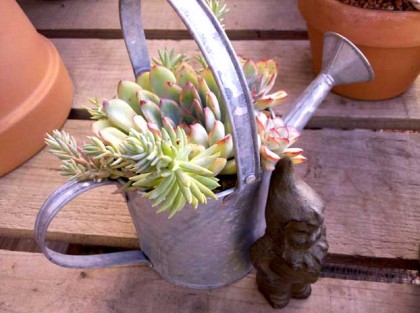 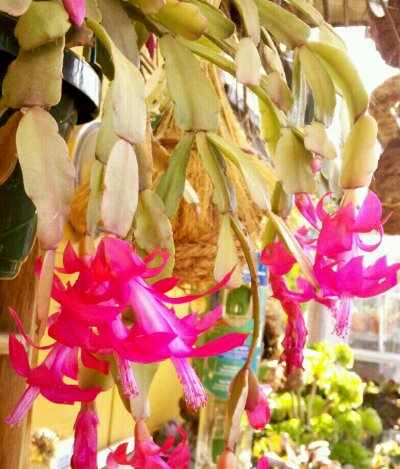 The sun is out. The gnomes are out. 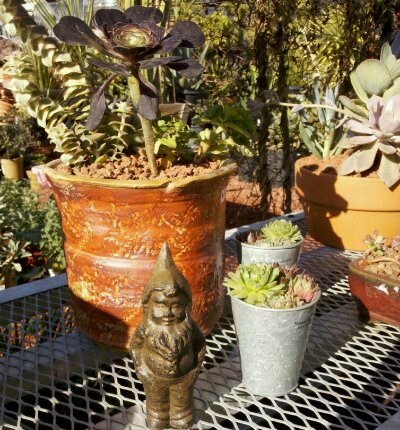 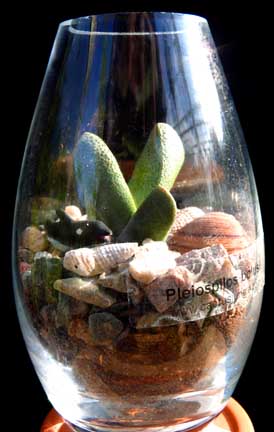 Check out the bloom Spike structure of the Aloe ferox. 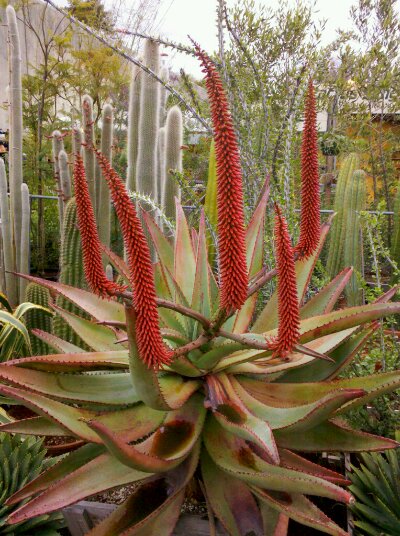 We had a difficult customer situation yesterday which given that we’re retail surprisingly doesn’t happen very often. We are very much customer service driven and try to help everyone have success, so in this case I got confused with what the guy was asking for and tried to help him with his plant, while he really didn’t want any help.

He wanted to return an expensive plant he bought from us 5 months ago and had not taken care of and get a different one instead. He came in pretty much ready for a fight. Anyway, we don’t take plants back, and nobody takes anything back 5 months later, so I tried to help him through the issues.

His story was that he came to us asking for an Ocotillo with small leaves, and had a photo too, so we showed him 2 possible species, neither of which were leafed out at the time, but both have the same leaves, and he picked one. All our plants have the name on the pot. 5 months later he comes in, having not taken care of the plant and complains that the leaves are too big and he meant the other species.

So I try to help him – how to take better care, what to do to make it look like he wants. This is where I went wrong. He wasn’t looking for help – he was demanding we take back a damaged plant after 5 months. I should have just said no, it’s been 5 months, we don’t take returns after 5 months. I think that would have been a better response.

Anyway, then he starts in threatening us. He says he worked on the TV show that we had some plants on once and he’s on the board of a garden club in Sacramento and he’s going to bad mouth us to everyone out there. I really didn’t take offense at this, and just kept trying to help him out, offering a discount on any new plant, etc. But my co-workers all afterward told me they got angry at this point – He was threatening us! I suppose at that point I should have told him the conversation was now over and he needs to leave the nursery.

So it’s a learning experience. These really are very rare for us, so it’s hard to be prepared when they happen. And now I’ll be keeping an eye on Yelp and Google for his negative review.

And for your trouble to follow this to the end.. a pretty picture! Yay! 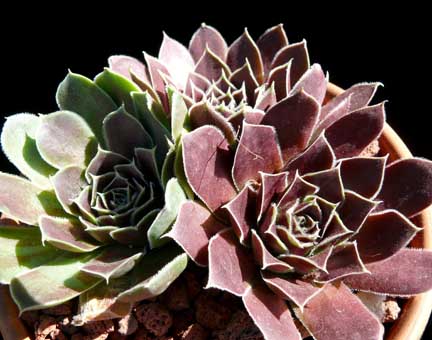 Google took pictures inside the nursery months ago and now they’ve finally got a walk though of the nursery up.

Interesting. Now all you people not in the Bay Area can see who we are. Freaky. 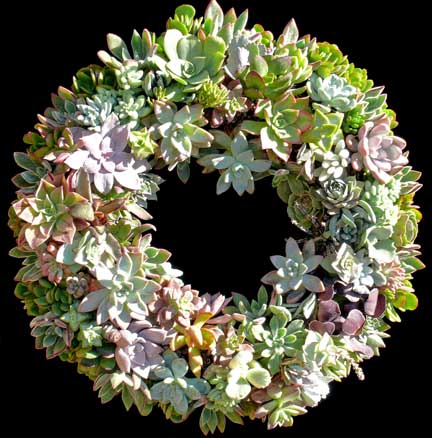 Did I mention that our Succulent Wreaths are ready?

If you pre-ordered one it’s ready for pick up. If you didn’t, we have lots of succulent wreaths ready and fully rooted in 2 sizes at the store.

This is what an unsuccessful delivery to us looks like. 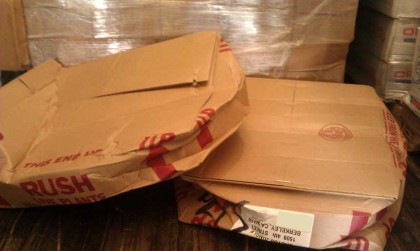 Note the Up arrows, one is up the other down. Clearly the worst of it was the box being turned upside down. Oh, and crushed too.

It’s a beautiful and warm, but quiet, day here at the nursery so now would be a good time for you to come visit finally. You know you’ve been meaning to for a long while. 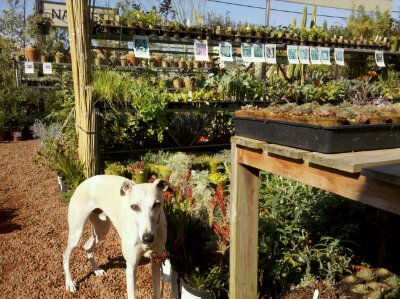