The exquisite cactus Euphorbia Lactea, native to India, is commonly called Mottled Spurge, Frilled Fan or Elkhorn. The bloom of this plant is called a Cristata. The cactus with its fan-shaped crested branch comes in an assortment of colours. 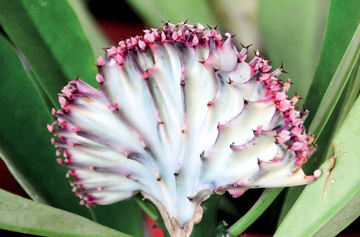 Just like many in the cacti family, the Euphorbia Lactea needs sun and warm temperatures to survive.

So much that needs correcting. The joys of blogging are being a pedant in public. I can’t correct people like this at the store.

1. It’s not a cactus. It’s not in the cactus family (cactaceae) but in the Euphorbia family (euphorbaceae).

2. Lactea is the species, so it should be lower case, i.e. Euphorbia lactea.

3. The bloom, should it bloom which it usually doesn’t, is called an Inflorescence.

4. The cristate portion of the plant is the plant itself, the E. lactea, the thing you see in the picture above the leaves. It’s grafted to a different Euphorbia base which grows the leaves because a ghost crest has very little chlorophyll.

5. Nowhere in the article does it say anything about these being beautiful, and this must be corrected, because these are beautiful.

6. The photo above does not do justice to these crests. Here’s my photo of one of them. Justice will be served. 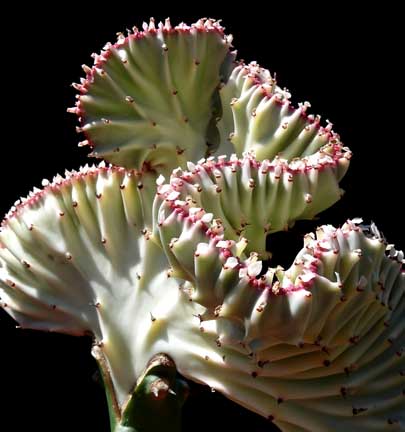