The Winston-Salem Journal wrote about rotting-flesh smelling flowers for Halloween, and ended up with the wrong caption for their photo of a stapeliad.

The giant saguaro cactus in Arizona is pollinated mostly by bats.

However, the text of the article did include this.

I was once seduced by a plant of Stapelia gigantea called zebra flower for its wildly striped flowers. I bought it because I was attracted to the huge bud it had formed, easily the size of my hand. It opened the next day, sending an awful stench through the house. Out the door and into the yard it went, where it was soon covered by a swarm of flies. It is a nasty pollination strategy, but it works.

That would have made a better caption.

Oh yeah, I almost forgot, here’s the photo in question. 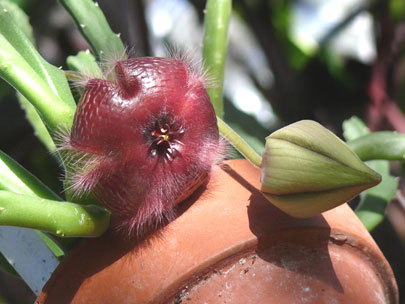 It’s not S. gigantea, but at least it’s related.