The endangered cactus wren is now moving into urban environments, or rather the urban areas are moving into the wren’s habitat.

Urbanization turns large areas of wild land into cities and suburbs, and has a profound effect on native speicies, changing where they live and how they interact,” says Paige Warren, an urban ecologist… 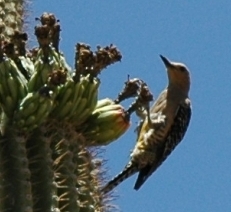 “The cactus wren is usually associated with the desert, since it builds nests in the protection of cacti and other thorny plants,” Warren explains. “However, this native species was able to penetrate the urban ecosystem more successfull the phaniopepla, and has been seen nesting in satellite dishes and other man-made structures.”